If you know how to look for it, finding silver in US coins becomes second nature.

Not to say that finding silver is easy, it’s a numbers game. The more coins you look through, the greater your odds of finding silver.

By knowing how to quickly identify silver coins you may be able to find a few dollars worth of silver a year.

Why were coins silver? Wasn’t it expensive?

Nowadays, people trust the stability of U.S. currency simply because it is backed by the U.S. government, but this wasn’t always the case. You probably heard about how the United States used to be on the “Gold Standard” this meant that every dollar issued to the public corresponded to a fixed amount of gold.

The same idea applied to coins, so each coin consisted of an amount of precious metal roughly equal to its value.

Although a 1946 silver dime is worth over $1 today in silver content, it was worth less than 10 cents when it was made.

Due to an increase in production, silver demand has increased drastically in the last century. Silver is used in electrical switches, conductors, and fuses. Silver has many uses because it is the best thermal and electrical conductor of any metal.

Eventually, silver coins did become too expensive to produce. In 1965 the U.S. mint stopped minting silver quarters and dimes.

What coins have silver?

No pennies have silver. Pennies have been made of copper, zinc, and/or nickel since 1793.

If your penny looks silver it is probably a steel cent! These pennies were minted in 1943 and are made of steel with a zinc coating, giving the penny a silver appearance.

If you do find a silver penny, it was more than likely plated. There is however, a very small chance you found a very valuable penny that was minted with the wrong material.

There are silver nickels! These are called Silver Wartime Nickels and they were minted from 1942-1945.

Nickel was in high demand during WW2, so to save nickel to be used in military weapons and machinery, the mint used 35% silver instead of nickel. A silver Jefferson nickel has a weight in silver of 1.59 grams.

Not all nickels minted from 1942-1945 were silver. To know if your nickel is silver, check for a mintmark above the depiction of Monticello on the back of the coin. There will be with a large P, D, or S.

Another common silver dime is the Mercury Dime. These are also 90% silver with a weight of 2.25 grams. Mercury Dimes were minted from 1916-1945.

Washington Quarters minted before between 1932-1964 are 90% silver. There is about 5.625 grams of silver per quarter. This is the most common silver quarter to find in circulation.

Before the Kennedy Half Dollar there was the Franklin Half. These coins are 90% silver with a silver weight of 11.25 grams.

Other 90% silver half dollars include: Commemorative Halves from 1892–1954, Barber Halves, Seated Halves, and Capped Bust Halves.

Unfortunately, these coins are rarely seen in circulation because they are highly sought after. It’s not unheard of for some to be dropped off at a local bank by someone liquidating a collection. So ask your local bank teller!

Did you know that the US minted two and three cent pieces?

The Three Cent Nickel was minted from 1865-1889 and contains no silver.

In 1992 the US mint began producing Proof Sets with silver coins. The dime, half dollar, and quarters in silver proof sets are all 90% silver.

Not all proof coins you find are silver. Since you cannot tell a silver proof coin from the year or mint mark, your next step is to do the rim test.

What is the Rim Test?

The fastest way to check if a coin is 90% silver is to look at the rim. A 90% silver coin will have a rim that is all a gray silver color. A coin that is not 90% silver will have a silver-colored band and a copper/brownish band.

Be aware that this method ONLY works for 90% silver varieties. It will not help you identify silver wartime nickels or half dollars from 1965-1970.

If you check the rims and are still not sure if the coin is silver, checking the weight will give you a good estimate. If all else fails you can go to a coin store and have them test the composition for you.

I have actually found most of my silver coins from CoinStars! CoinStars, or generic coin-counting machines, don’t accept silver coins as they are not the weight that the machine uses to verify a coin’s authenticity.

After using a CoinStar, many people leave the rejected coins in the reject tray or on the counter. Little do they know they might be leaving behind valuable silver!

I check the CoinStar every time I go grocery shopping. I’ve gotten my friends to check it to. Whenever my friends find foreign coins or silver I buy the coins off of them. We both leave happy!

For more on finding silver in CoinStar machines, go to: “How To Use A Coinstar To Find Rare Coins”!

If you are looking to find silver, you should read up on coin roll hunting. Coin roll hunting gives you exposure to many coins, therefore increasing your odds of finding silver.

Too much work? You can also buy online!

Coin roll hunting is a lot of work. You have to go through hundreds of dollars in coins before you usually find any silver. I like coin roll hunting for the fun of it, but it is not a very profitable endeavour. 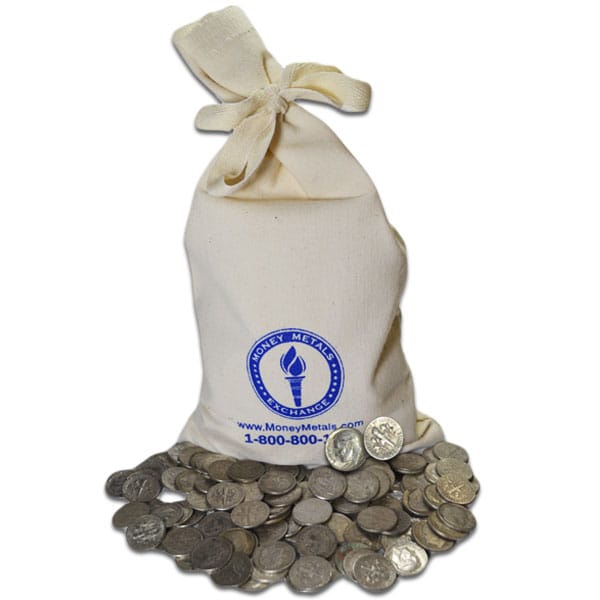 The term “junk silver” refers to silver from a coin. Usually, because silver in circulated coins has been touched a lot, it tends to be tarnished. Tarnishing does not lower the value of silver beyond the melt value. In fact, lot’s of collectors like tarnishing and prefer to call it “toning” when it is evenly spread across the surface of the coin. Toning can increase the value of a coin.

Did I miss anything? How do you find your silver coins? Vote in the poll and comment below!